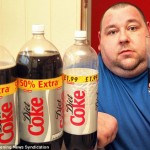 Experts have warned us many times that drinking Coca-Cola for years we can cause weight gain, tooth decay and sugar addiction, among others. Now, Besides, They have discovered that taking this carbonated drink can affect men down considerably the quality and quantity of sperm.

Although health professionals warn of its effects, year after year the company is still consuming. According to The Sun, British Alcohol Beverage Association claims that the 55% soft drinks sold in 2014 tail were. If you're a man, You should go down or stop consumption.

Scientists have shown that drinking a liter of Coca-Cola a day can reduce the number of sperm in a 30%. A study by the University Hospital in Denmark in Copenhagen, applied to 2.554 young boys, He showed that drinking a lot of cans of cola can produce a dramatic effect: go down to 35 million sperm per milliliter, far from the 56 million per milliliter of moderate consumers. These scales are in normal ranges, but if the level continues to decline sperm, They can be sterile.