Whether for reasons natural by the irresponsibility human beings, along the history, They have caused fires death of thousands of people innocent. Not only that, also they finished with homes, forests and everything in their path. In this post we present the most terrifying and chaotic fires in history.

Currently this disaster remains one of the most famous episodes of Imperial Rome. 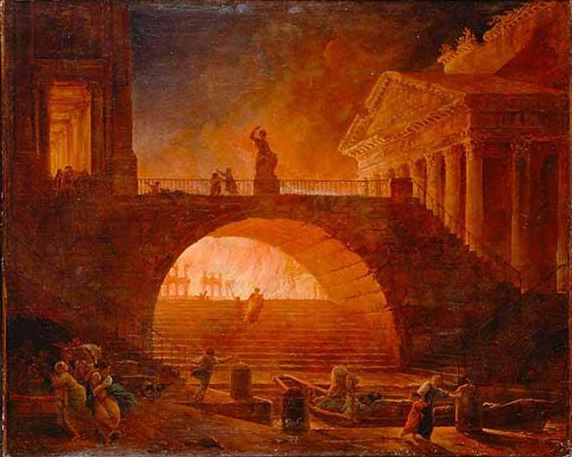 The fire of Rome in 64 D.C. is one of the most remembered by the persecution of Christians.

One night in July, year 64 d. C., voracious fire was declared in the area of ​​the Circus Maximus, in Rome. The wind quickly spread the flames, sowing terror among the population.

After a less 5 days of relentless devastation of four of the fourteen districts of Rome were razed, and seven others were damaged. Some monuments, as the temple of Jupiter and the home of the vestal virgins were burned down.

Perhaps most important of the great fire were its consequences. On the one hand, Christian historiography indicates this as the root of the first persecution of Christians, as, after the fire, Nero blamed them for causing fire, and many Christians were executed for it.

However, the last evidence suggests that the cause of the fire was accidental.

In the first stage under Nero, his tenure was marked by respect for the Roman political traditions, but the emperor took the voracious fire I -intencionado or not- to build his grand palace, Domus Aurea, and continue a personalist and populist government.

This gigantic fire destroyed four fifths of the city. The fire started in the house Thomas Farynor , baker Carlos II , King of England. Upon learning, the reaction of the mayor, Sir Thomas Bloodworth, He was underestimating the sinister.

This image recreates the London fire 1666, that in five days it destroyed the city

After the grave miscalculation Bloodworth, in just five days the fire devastated London. The fire main system of the city was a series of firewalls that required the demolition of surrounding houses, but the owners refused to action and the mayor was unable to convince the neighbors, exacerbating problems.

As if this were not enough, the city was in the middle of drought and timber buildings was very dry. The alert came up to King Charles II, he offered to send soldiers to the city, but the relationship with the monarchy was then so tense that his offer was rejected.

The monarch decided to dismiss Mayor, order the demolition and send their men to cooperate in fighting. But it was not a simple mission: the narrow streets and wooden houses and straw of the city hindered the task and destruction continued.

Finally, the flames thanks to the strong winds from the east stopped and gunpowder was used to create effective firewall that were stopped.

But it was too late and the outlook was bleak: 80.000 homeless people, since they had destroyed more than 13.000 houses, in addition to 87 churches and three entrances to the city. The death toll is unknown.

It is believed that the 8 October 1871 a cow in a barn located in Dekoven Street was the kerosene lamp that caused the Great Fire of Chicago dropped. 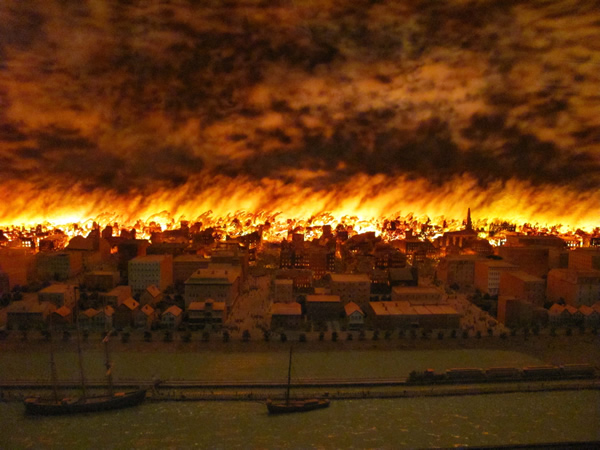 The situation was very complex, because at that time the city was built mainly on wood.

The fire killed almost 300 homeless people and left more than 100.000. It is estimated that the fire destroyed more than 17.000 buildings: households, federal buildings, hotels and the Court, among others.

The disaster led to the subsequent transformation of the city: de facto, Chicago School is an icon in modern architecture.

In total they were 23 fires that ravaged southern California, between 20 October and 9 November 2007. These left 17 fatal and victims 70 wounded. 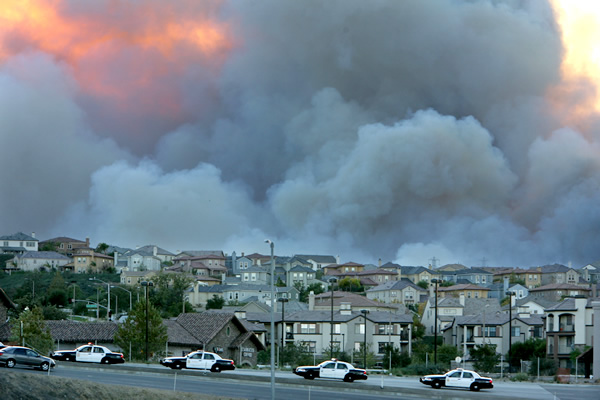 The fires forced the evacuation of about one million inhabitants, they destroyed 1.500 houses and structures, and they washed away 2.000 kms. land from Santa Barbara to the Mexican border. Damages were estimated at 1.600 millions of dollars, without calculating agricultural losses.

The governor at that time, Arnold Schwarzenegger , He declared a state of emergency in seven California counties, as President George W Bush requested federal aid. So, They joined the cause, the Armed Forces, National Guard and 3.000 prisoners (non-violent crimes) and Mexican firefighters.

He helped fire the drought in Southern California. At the same time, the fires were spread by strong Santa Ana winds. The situation improved 26 and 27 October, when the weather turned cooler and cloudy. Later, the rains came, although they were minor, They helped the work of firefighters.

At the conclusion of two of the biggest centers in Orange and Riverside were started intentionally, the local police arrested five suspects. Finally it was discovered that one of the most destructive fires in Los Angeles County was caused by a child playing with matches.

In the return home, entire families searched through mountains of steel, ruins and objects black ash value, but they found only ruins

One of the most devastating and dramatic fires was the one that hit Australia. In February 2009, Voracious flames charged at the least 189 lifes, left wounded more than 500 population, and a legacy bleak desolation. 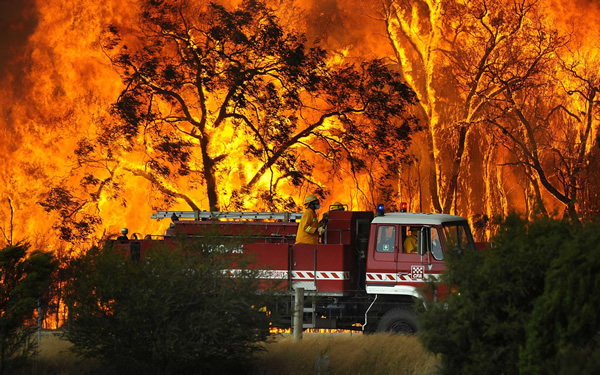 Many people died inside their cars as they tried to flee the advance of the fire, and others perished trying to save their homes. Also killed thousands of animals. Thousands of survivors took refuge in public buildings and schools.

The fire destroyed cities and took the lives of entire families, causing sadness and anger and indignation, after police revealed that some of the fires were caused by arsonists. The authorities, in particular the then Australian Prime Minister, Kevin Rudd , They accused the authors of committing “mass murder”.

The flames destroyed more than 1.800 housing a total of 450.000 hectares mainly in Kinglake and surrounding- also fueled by a wave prolonged heat, since the fire several localities came the day after the state of, including the capital of Melbourne, record the highest temperatures since 150 years old.

The nine most dangerous volcanoes in the world