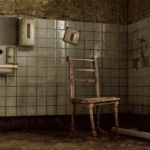 Spain is full of stories and legends that speak of mysterious appearances country, unexplained sounds in the middle of the night and a rumor of tormented spirits roaming the houses and sidewalks. We talk about places said to be haunted, is difficult to explain in many of the things that have happened or are happening in them. Usually these corners there behind a gruesome past that some believe is reflected by signs that not everyone is able to perceive.

In the heart of Condado de Treviño long the roads were lost in Ochate. Walking on foot through the countryside arrives at an abandoned village where many claim to have experienced various paranormal phenomena. The tower of San Miguel is what remains in this city where the epidemic was primed History, disappearances and unexplained deaths. After its abandonment, Lea has been numerous accounts of EVP and worthy a horror movie.

At the deceased Maria Gomez Camera Bélmez of Moraleda (Jaen) is that for many is "the most haunted place in Spain". For others it is a big fraud, but still no one has found the key to the different faces that have been reflected in floors and walls of the home of the Royal Street number 5 which has been studied by scientists and parapsychologists worldwide. Whether mysterious reflections of people who no longer exist or "teleplastias", history Bélmez faces is really disturbing. For decades, including periods when it was closed and sealed up tight, faces again and again stopped not appear.

In the province of Zaragoza in the abandoned village of Belchite still resonate war drums, specifically the Spanish Civil War. In this locality, retaining the damage arising from the bombing and shrapnel from one of the bloodiest battles that were experienced at the time, who says there are the sounds of the planes still listen, missiles in their eternal hiss and voices of those who disappeared from the face of the Earth. Belchite has been studied and EVP and even more of a television will have cast their emissions noise without explanation would. O sí…

It is rare that people do not want to stay in the room 712 Parador de Cardona, an ancient castle that functions as hotel. Maybe it's because I have been constant appearances in this room who is said wandering spirits of past inhabitants of a fort that served as a prison and torture center in the Middle Ages. Unless someone specifically asks for stay in this mysterious room, Hotel managers never offer.

5. The Chest Hospital of Terrassa

A former hospital in Terrassa near Barcelona which was used to accommodate patients with respiratory diseases among 1952 and 1997 has not only apparitions and unexplained phenomena but with devastating data. And the press at the time and spoke to one of the hospitals with the highest rate of suicides around the country, with patients suffering from an incurable psychosis that made them he jumped from the top floor.

6. The old building of the Provincial Council of Granada

Those who have seen the face of Father Benito far well understood why the old Provincial de Granada, Inns on the Street, I could not miss our creepiest list. This building has long been gaining attention and too many videos, EVP and photographs that have been collected on the site. Built on a former convent with adjacent cemetery, the building of the Provincial Council of Granada, has more legends and apparitions from which anyone can absorb in a few words. Ghostly figures wandering the halls, moving objects alone, cries in the middle of the night ... why are not few parapsychologists and investigative journalists have taken very seriously the history of this place.

7. The Mount of Souls in Soria

Gustavo Adolfo Becquer gave us one of the greatest legends of ghosts and apparitions that went from mouth to mouth until most precious literature of the nineteenth century. The Mount of Souls is a story of Templars and spirits that are seen every night of the dead and mystery surrounding blood and deaths of young Alonso and Beatriz. Becquer's narrative makes us imagine that place shrouded by fog lights and fleeting. Of course there really, and I am convinced that many would come or not paint this place alone to please anyone. Especially on nights when the dead ...

8. Ghosts of the Reina Sofia Museum in Madrid

Before museum, Queen Sophia served as General Hospital. Many people perished in their departments and, who had not been claimed by loved ones bodies, were buried under the ground. Few places in the capital of Spain have collected so many comments from witnesses who have been frightened by the passage of the ghostly figures of three nuns, after it emerged his bones lay under the main entrance of the existing museum. One of his "ghost" has a name, Ataulfo, that has left its mark on countless occasions, including seances that, as participants, attracted the attention of numerous spirits that roam says Reina Sofia galleries.

They say it was luxurious spa hotel lost its owner in the years 30 playing poker. And became a building that tuberculosis became crowded in civil war. It takes decades to complete abandonment to be a magnet for the unexplained friends. Because some say its depencencias have seen things or heard voices rare. It was discovered much later the presence of underground tunnels that were used in the war. And there have also entered appearances of the creeps.

Antonio Machado, in The land of Alvargonzález talks about the Black Lagoon, located in the mountains of the Picos de Urbion. Legend has it that there's no background, and it caves and underground streams that will give arise to the remote sea. Machado told the murder of a father by his two sons, Stone Contractors who tied his feet after the stabbing and present him with an ax just to be done with a blood stained legacy. Al final, innocent after being executed and lose everything they had won, children end up perishing in the waters. Cries are still heard in the Black Lagoon that Soria "legendarily terrifying".

Salvana tower has become the most popular place in Catalonia, within the mystery, Numerous visitors flocking, Castillo called hell to find and experience all kinds of paranormal sensations, some of them have succeeded, some even say that there will never again. Clearly, Castillo nicknamed Hell honors within its walls which breaks when the phenomena are manifested. It is located in the famous Colonia Güell, designed by Antoni Gaudí, in Santa Coloma de Cervello.

And you, Spooky know any other site in Spain?

Why try the ice cream Daisy before me? Because if not, look what happens…