Within 250 millions of years, It will be able to walk from what is now Alaska to Australia, via Africa and Antarctica, without having to get your feet wet. All the Continents we know today have merged into a single giant landmass, Pangea Proxima, surrounded by an ocean that occupy the rest of the globe. It's what the geologist speculates Christopher Scotese, of the Northwestern University en Evanston (U.S.), It is leading from the eighties developing and refining the project Paleomap , An atlas of the history of the earth's surface and what lies in a hypothetical future.

Albeit invaluable human perception, continents not stop moving. The lithosphere, the outermost layer of the Earth, which forms the continents and the ocean floor, It is rough and rests on a mantle magma fluid. Fragments of lithosphere, called plate tectonics, They move over the mantle at a rate ranging from a few millimeters to several centimeters per year. "The usually compared to the rate at which fingernails grow", illustrates Daniel Garcia-Castellanos, geophysicist Institute of Earth Sciences Jaume Almera (ICTJA-CSIC). "It's a very slow-moving for us, but geological scales produce a very large effect. In a million years, a continent can move kilometers ", added in a telephone interview.

Current models indicate that on Earth there are three processes that drive the movement of tectonic plates. According to Christopher Scotese, the main one is called subduction. When two tectonic plates collide, overlap the edges. The edge overlies rises and compacted, causing islands forming in the ocean, as the archipelago of Japan, or high ridges, as the Andes in South America. The lower edge, Conversely, It is introduced into the mantle beneath the lithosphere and sinks, because it is denser than magma. to sink, rest strip plate, which feeds back into the process.

Regions on opposite edges of the plates collide, in return, the opposite phenomenon occurs: "Where the plates are separated, to replace the space left, amount mantle materials, having lower density and push plate tectonics ", explains Daniel Garcia-Castellanos.

By last, the mantle undergoes a phenomenon called convection. The temperature of the inner mantle zone is higher, making materials are less dense and pushes up. Upon reaching the outer zones, cool, its density, and again descend. "It's the same thing that happens when water boils in a pot", Garcia-Castellanos clarifies. "It is still under discussion which of the three mechanisms is the most important", points, in contrast to Scotese.

A puzzle the size of Earth

The first proposed that the continents had not always been where they are now was Alfred Wegener, German geophysicist and explorer who warned that current land masses fit together like a puzzle. The most obvious example is South America and Africa. Wegener also found fossils of animals and plants in similar land separated by the Atlantic Ocean coast. Since these organisms could not have crossed the Atlantic, Wegener reasoned that the continents must have been connected in the past. Geophysicist published its findings in 1911, but the scientific community ignored, convinced that the continents were unmovable.

It was not until the fifties when the evidence became irrefutable. "The magnetic field of the Earth is engraved on the rocks that are formed throughout Earth's history", explains Daniel Garcia-Castellanos. Magnetism makes new rocks that form deposited in a certain orientation depending on their position on Earth. Comparing the magnetic orientations of rocks in different regions can rebuild their positions in the past. paleomagnetism, as this discipline is known, He showed that Wegener had been right. He made between 335 and 175 million years there was a supercontinent that brought together all current land masses: Pangea. Since, paleomagnetism measures have also proven that before Pangea was at least five supercontinent, throughout the history of Earth.

From the speeds at which the tectonic plates move currently, its history and understanding of the processes that drive them, Christopher Scotese has produced a series of maps illustrating how will the Earth in the next million years. "Even though [these maps] They are informed speculation, They are not science. We can never really know what the future holds ", however points out the researcher at the atlas in which compiles maps. 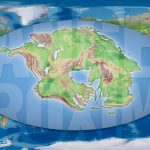 "The future position of plate tectonics does not enter the scientific field, because one of the premises of any scientific work is that you can test. And obviously we will not be able to contrast what will be the position of the plates within 250 millions of years", Daniel Garcia-Castellanos matches. Predictions become more inaccurate as they move away from the present. "But nevertheless, Scotese work is very rigorous and has great informative value ", clarifies.

According to the forecast of Christopher Scotese, one of the first events to take place, before 25 millions of years, It is that Africa will collide with Eurasia and will close the Strait of Gibraltar. Pushed by the African continent, the Iberian Peninsula will rotate in the direction of clockwise until the clash with the French north coast, within 50 millions of years. Then, the Mediterranean will have disappeared completely. "Being in a region with a very dry climate, when the closing Gibraltar Strait, the Mediterranean will evaporate in no time ", Garcia-Castellanos added, who along with his team proved that it happened already once, six million years ago.